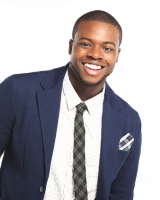 The Dogwood Center is once again a remote location for the live broadcast of Calvin College’s 2018 January Series.

When it comes to breaking boundaries in the world of music, Kevin “K.O.” Olusola is no stranger.  He has re-imagined the cello, mashing together cello and the urban art of beatboxing into a new musical genre called cello-boxing.  It’s the sound of the concert hall meeting the street.  Kevin is best known as the beat boxing member of the Grammy-winning vocal quintet Pentatonix and together they’ve released 5 albums, each landing in the top 15 of Billboard’s Top 200 Album Chart. Kevin has shared the stage with David Crowder, Gungor, and Quincy Jones and in 2015 he released his first solo album, The Renegade EP. A repeat performance & conversation with Kevin Olusola will take place on Wednesday evening at 7:00 pm in the Covenant Fine Arts Center. No tickets required. Due to contractual restrictions, these presentations will not be recorded or archived.

The Dogwood Center, a remote site for the Calvin College January Series, is supported in part by the Fremont Area Community Foundation.