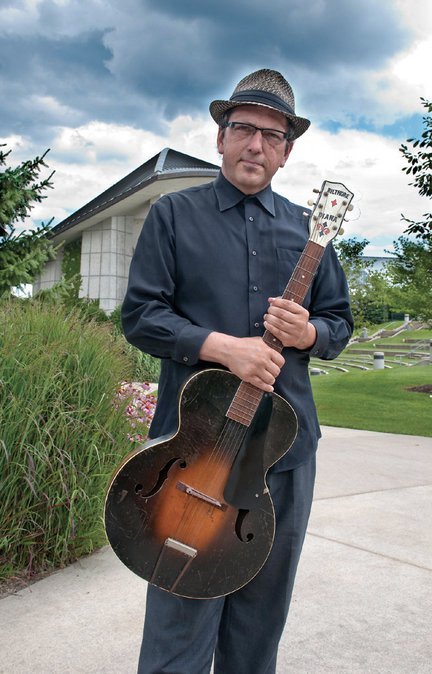 Widely revered as “the ambassador of West Michigan music,” award-winning folk and Americana artist Ralston Bowles is a uniquely compelling troubadour whose influence and songs reach across the United States and the globe. The musician and singer-songwriter has released several critically acclaimed albums – including “Carwreck Conversations” and “Rally at the Texas Hotel” – containing songs that have been covered and reinterpreted by a host of indie-folk artists, from Peter Mulvey to Caroline Aiken. He has frequently toured the United States and Europe, sharing stages with the likes of Bob Dylan, Shawn Colvin, Arlo Guthrie, Hothouse Flowers and many more. His compelling and insightful songs have inspired a generation of musicians, evidenced by a recent double-album (“Michigan Music”) compiled as a tribute to Bowles, a project featuring 33 Michigan bands and solo artists.

Ralston Bowles’s father played the fiddle, guitar and banjo in the Appalachia hills before he moved to Gary, Indiana, to work the steel mills. Ralston’s first professional job was at the age of 16 when he was asked to make up one of his story songs for a neighborhood party.  After graduation he found himself playing in clubs and coffeehouses throughout the Midwest, making up songs about the people and places he visited. He has received awards and recognition from American Songwriter Magazine, NSAI/CMT, Unisong, the International Song Competition and Mountain Stage New Song, among many others.  As a Kerrville New Folk finalist, he even found himself opening for such artists as Shawn Colvin, T-Bone Burnett and Arlo Guthrie. His first recording, “Carwreck Conversations,” was produced with Marvin Etzioni  and earned him triple Jammy Awards locally and recognition as best musician in West Michigan by Grand Rapids magazine. It also led him to his first commercial release through Judy Collins’ Wildflower Records. His second album Rally at the Texas Hotel also won best album of the year and features a duet with Bob Dylan band leader, Charlie Sexton. He has become a bi-annual favorite at Boston’s Club Passim.  He first came to Italy 4 years ago to participate in a Townes Van Zandt Tribute night in Milan at Casa 139 with a number of world traveled musicians celebrating the Texas songwriter. Ralston’s newest album “Little Miracles” features 35 musicians, all of them top-drawer players was produced by band leader for Emmy Lou Harris, Phil Madeira. Ralston recorded his parts while in the midst of chemotherapy treating colon cancer. Tracks were recorded in numerous states and assembled in Nashville.  He is currently in remission and glad to be back out playing again after a long two year break.

Click here to get your tickets now! Tickets are $15 each, reserved seating.  The Dogwood Center is located one mile east of downtown Fremont. Doors open for seating at 7:00 p.m.