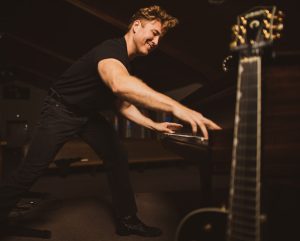 Dave has been featured on NPR Radio’s “Jazz at Riverwalk.” He made his European debut in 2008 at The Bern Jazz Festival (Switzerland) in a combo with jazz legends and Benny Goodman band alumni guitarist Bucky Pizzarelli and vibraphonist, the late Peter Appleyard.

In March 2022, Dave and his band performed to a sold-out audience at New York City’s Birdland Theater. Dave is a Mack Avenue Records artist. His 2013 CD “Don’t Be That Way” met with critical acclaim.  His second release, Blood Moon, which features five originals and six pop/jazz covers, reached No 24 on the Billboard Jazz charts in 2018.

During the isolation of the pandemic, fate steered Bennett’s time off the road and pushed him into his home studio where he transcended his jazz leanings altogether.  Released in June 2022, “Nowhere Fast” taps into the pain and joy of living in these trying times, the power of healing, and music’s ability to transform isolation into inspiration.  Road songs, reverb-laded guitar solos that could power a surf documentary, and memories of loves and lives lost are the mile markers that make up his latest release.

Click here to purchase tickets. Tickets are $20.00 each. The Dogwood Center is located one mile east of downtown Fremont. Doors open for seating at 7:00 p.m. Online sales close two hours prior to events, please call the box office for ticket availability at 231-924-8885 if online sales have ended. The Dogwood Center Box Office is open Tuesday – Friday, 10:00 a.m. – 2:30 p.m. Tickets are available online at www.dogwoodcenter.com, at the Dogwood Box Office, or at NCCA-Artsplace in downtown Fremont. For more information, phone 231.924.8885.