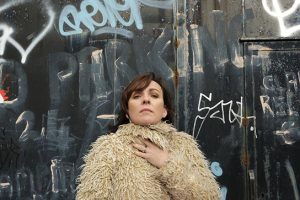 Irish singer-songwriter Karan Casey has been blazing a trail for over 25 years. A lover of ballads, love songs and searing versions of social justice songs, fond of a good yarn, she has toured the world making deep connections with her audience connecting via Ireland’s past but crucially repositioning women and songs in a universal and a modern setting.

Karan has been striking out lately to explore new areas of performance on the piano and with spoken word and theatre. She has released eleven albums as well as contributing to numerous other artists’ projects – appearing on more than 50 albums so far – and has toured extensively throughout North America, Europe and Japan, performing with her own band as well as collaborating with such diverse musicians as Maura O’Connell, James Taylor, Bela Fleck, Boston Pops Orchestra, Kate Ellis, Niall Vallely, Pauline Scanlon, The Chieftains, The Dubliners, Peggy Seeger, Karen Matheson, Mick Flannery, Mícheál Ó Súilleabháin, Tim O’Brien and Solas. In 2018 Karan helped found FairPlé which is an organization aimed at achieving fairness and gender balance for female performers in Irish traditional and folk musics. Karan tours with her band Niamh Dunne, Sean Óg Graham and Niall Vallely.

Karan most recent album Hieroglyphs That Tell the Tale produced by Donald Shaw, was released on the Vertical Records Label. Her song “Down in the Glen” was nominated for Best Original Folk Song at the RTE Folk Awards 2019 and she completed a PhD in music in 2019. Karan has recently performed her new show with Director Sophie Motley called I Walked into My Head which was premiered at the Kilkenny Arts Festival 2021. Karan is currently working on a stage show about women in the Irish revolutionary period to be produced at the Everyman Theatre in Cork in 2023. Karan’s new album “Nine Apples of Gold” will be released in February 2023.

Click here for tickets. Tickets are $20.00 each. General admission, Black Box. Tables can be reserved with the purchase of eight tickets. The Dogwood Center is located one mile east of downtown Fremont. Doors open for seating at 7:00 p.m.

The Dogwood Center is located one mile east of downtown Fremont. Doors open for seating at 7:00 p.m. Online sales close two hours prior to events, please call the box office for ticket availability at 231-924-8885 if online sales have ended. The Dogwood Center Box Office is open Tuesday – Friday, 10:00 a.m. – 2:30 p.m. Tickets are available online at www.dogwoodcenter.com, at the Dogwood Box Office, or at NCCA-Artsplace in downtown Fremont. For more information, phone 231.924.8885.