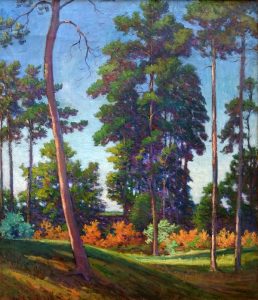 The son of a Chicago doctor, Albert Herman Schmidt (1885-1957) attended the Art Institute of Chicago (AIC), studying with John H. Vanderpoel and Charles F. Browne. After four years at the AIC. Schmidt began exhibiting there in 1908, continuing through 1924. Like most of his peers at the time, he sought further study in Europe, choosing the Academie Julian in Paris, a school especially popular with Americans. Schmidt also studied paintings all over Europe, from the Old Masters to the Fauves. He met and married fellow art student and Chicagoan Marjorie Hanson in Paris in 1912.

The Schmidts returned to the United States during the height of American Impressionism and just before the famous Armory Show in 1913. His oil and pastel paintings of the time display the lessons he learned from French Impressionism in terms of style, approach, and subject matter. Schmidt exhibited one of his French landscapes at the Pennsylvania Academy of the Fine Arts in 1911 and another painting at the National Academy of Design in 1914, thereby following the proscribed path for most American artists seeking official sanction. He also represented Illinois at the Panama-Pacific Exposition in San Francisco (1915) along with 46 other artists.

Schmidt traveled to New Mexico and Arizona in 1921 and after visiting Santa Fe determined to move there. The timing of his move is significant, as Los Cinco Pintores had exhibited for the first time the previous fall and the Taos Society of Artists began to disintegrate that summer. The following year (1923) saw the formation of “The New Mexico Painters.” Perhaps even more important for Schmidt was the presence in Santa Fe of several Chicago transplants whom he had known in Chicago.

Although Schmidt is best known for his New Mexico work, this selection is from his earlier impressionist work. Those here are landscapes that he painted of Michigan while staying in the Newaygo County and northern lower peninsula area.

This artwork by Albert Schmidt is part the NCCA permanent collection, generously donated by his granddaughter, Karen Schmidt.

Schmidt’s work was stored away at his death by his widow, Marjorie, and was reintroduced to the public thirty-five years later when Karen discovered it in a store room after inheriting her grandparents home.

The Lobby Gallery is open during performances.

Exhibits in the Dogwood Lobby Gallery are courtesy of   the Newaygo County Council for the Arts – Artsplace.